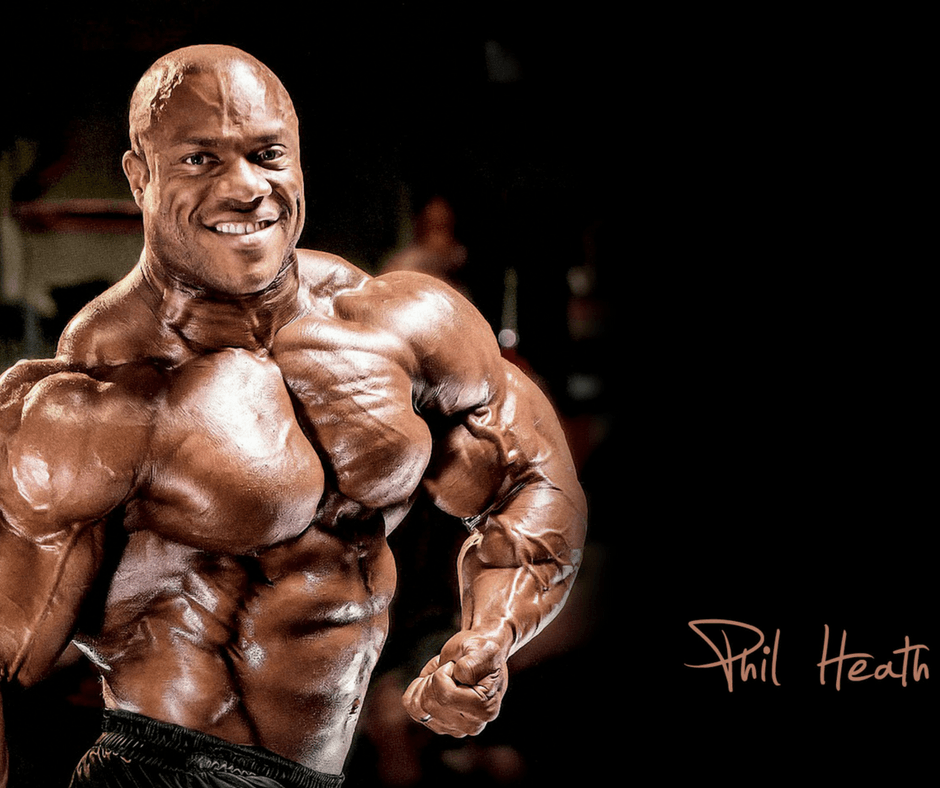 However, he realized that he had lost the competition due to reliance on his genetic predispositions and he began to train in a more clever way. Phil graduated in two fields: Information Technology and Business Administration. The decision to start bodybuilding instead of basketball was ultimately beneficial for him. So let’s look at his training program and diet plan to find out how did he manage to build the winning figure seven times in a row. [1]

In 2014, Phil Heath became the fourth wealthiest bodybuilder in the world. At that time, he was valued at about $5 million. Since then, the total of his earnings at Mr. Olympia is worth $2,375,000.

“To be Mr. Olympia is a big responsibility on the competition stage, but even more off stage. It makes me happy to know that my personality and hard work help others achieve their goals. I live by this motto: “Train hard, reasonably and have fun!” Make sure you are challenged by new goals and enjoy your ride no matter how wild it is.” [3] 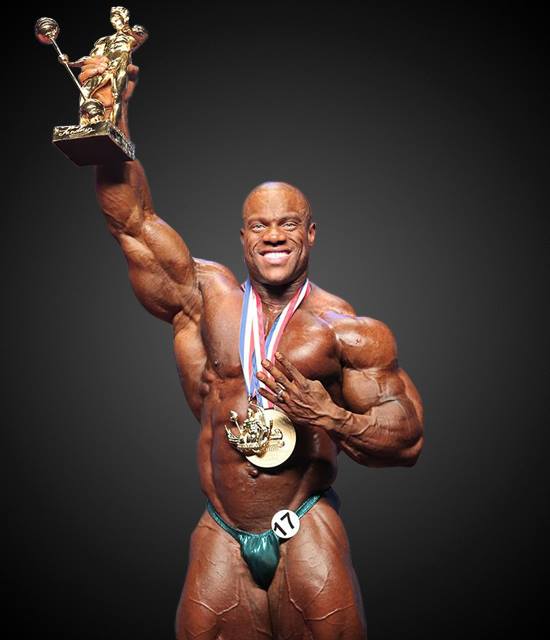 Phil Heat and his training plan

Heath’s training involves three to five exercises per muscle group and lasts approximately two hours. He focuses on the technical performance of the exercises, similar to Arnold Schwarznegger or Ronnie Coleman, who were also multiple winners of Mr. Olympia. His trainings slightly vary depending on whether he is preparing for the competition or is already after the competition.

“My annual goal is to be bigger and better than last year. Competition is getting better and that’s why I’m still under more pressure. Nothing is easier. If I want to continue winning, I have to overcome myself. This constant racing does not mean that I’m doing something crazy in the gym. I stick to basic bodybuilding exercises. I exercise every muscle from multiple angles and I try to improve my weaknesses. My training plan must be designed to be challenging and to help me progress.“ [4]

Each one of Phil’s trainings begins with a short cardio workout – it’s part of his warm-up. You can find the training plan he used when he was preparing for Mr. Olympia below. 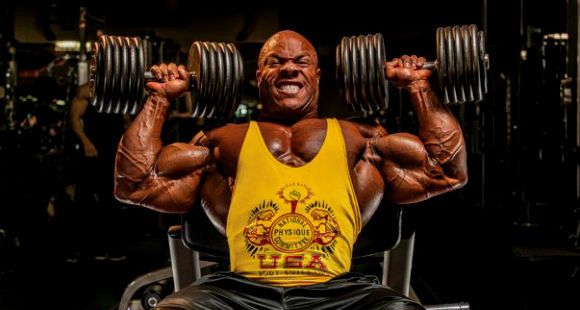 FST-7 means performing 7 sets of one exercise at 6-12 reps with a 45 second break. During the break, you can choose between stretching and isometric contractions that are to be performed after every other set. 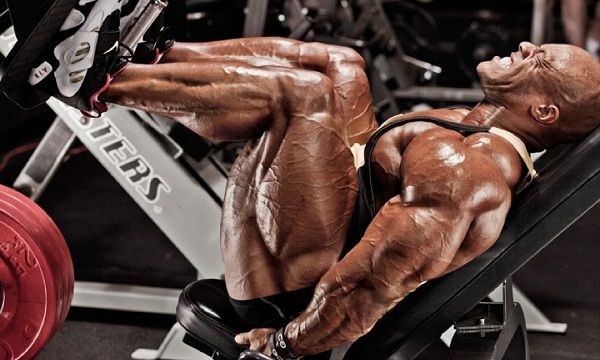 Phil claims that you don’t have to invent any new exercises if the ones you’re using are working. Another tip from this phenomenal bodybuilder is that it is not necessary to fully spend all your energy at the fitness center to build muscles. Especially if your body is not recovering fast enough or does not respond to training as you would like. So, smart training is the key to success. Most people will never find a training system that works best for them. [6]

After waking up – BCAA drink

Phil Heath’s bulking diet is mainly about gaining a huge amount of muscle without unnecessary subcutaneous fat. In February 2018, a video was published in which Phil explains his meal plan:

In this video, he says that he wakes up at 5:00 to 5:30 8-9 weeks before the competition. Immediately after waking up, he would do a half-hour cardio workout on fitness steps or treadmill. He uses a heart rate monitor and smart watch to achieve a heart rate of 145-150. This way he ensures that he is in an effective fat burning state. Then he returns home for breakfast. His breakfast consist of approximately 230 grams of minced chicken, 1.5 to 2 cups of egg whites and approximately 60 grams of carbohydrates – usually from rice in milk or oatmeal. According to Phil, oatmeal contains fiber which helps to absorb food. Along with breakfast, he supplements multivitamin, fish oil and vitamin C. 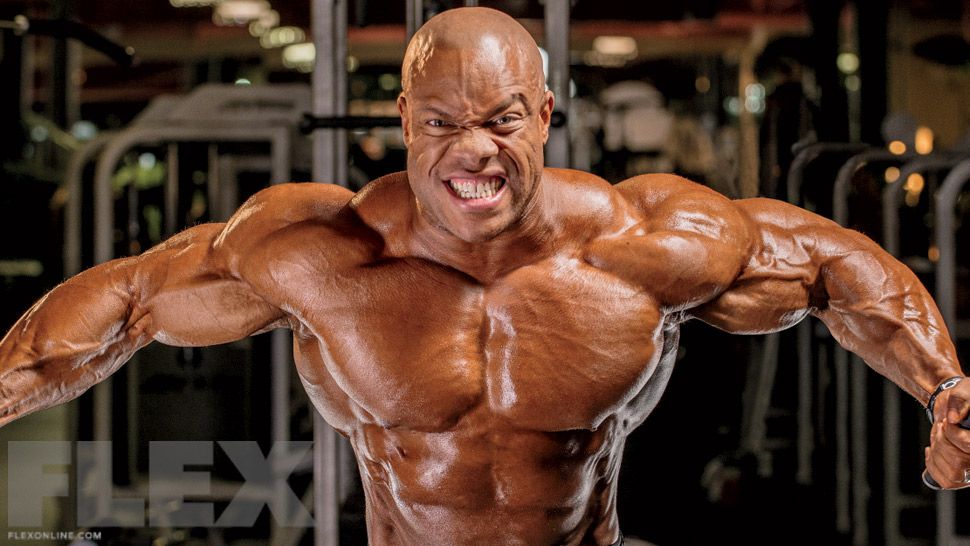 During the day, he eats every 2 to 2.5 hours. After counting all of his meals, we would have a daily caloric value of about 6400 kcal, which is a little lower by the end of his prep phase. These include, for example, 340 grams of cooked chicken, beef, minced turkey meat or white fish. These are his main sources of protein except egg whites. He consumes a total of approximately 500 grams of protein a day. He recommends other serious bodybuilders to consume at least 3 grams of protein per kilogram of their weight. As far as fish are concerned, he prefers tilapia.

He further pointed out that he prefers tilapia because it has a low mercury content. By the end of his contest prep, the fish is almost his only source of protein. An amount of 230-340 grams of meat at the end of prep phase means a lot of tilapia.

“You surely don’t want to get mercury poisoning. Never. Many of the fish available have higher mercury values than they should have.”

As the contest gets closer, he reduces carbohydrate intake to tone his muscles but keep them visually large. Out of 8 meals a day, he includes carbohydrates in just four of them. 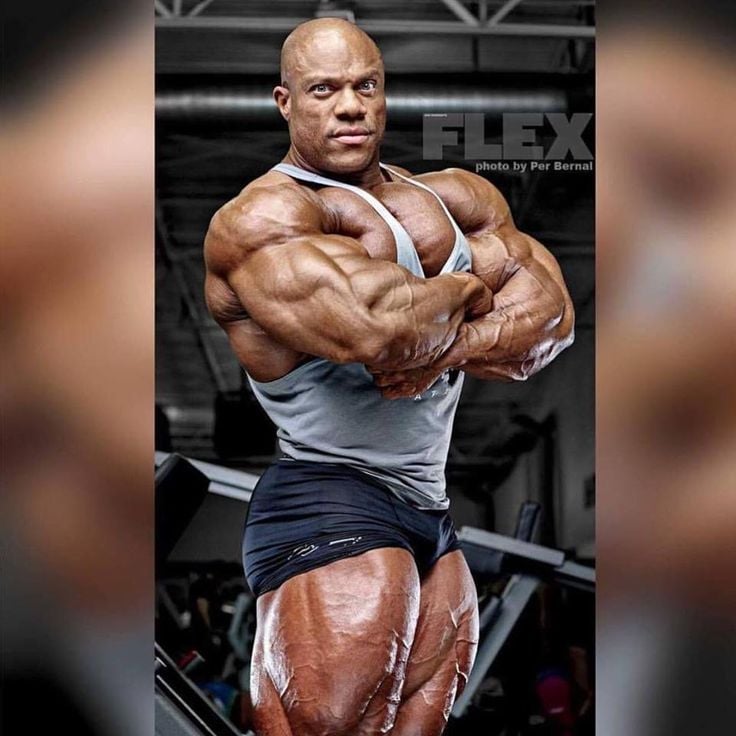 “At the end, this change makes me a living zombie, because it is the carbohydrates that give us energy.”

As for water, Phil drinks 4 to 7 liters of water a day, but only one big bottle of water over a few days within the last week before the contest. Nevertheless, he still eats the same amount of meat.

“This is how we get into a vascular, shredded look.” [8] “I drink approximately 4 liters of water a day during the bulking phase. It is unnecessary to pour liters and liters of water into yourself if you are receiving enough carbohydrates. My off-competition diet is more organized than a couple of years ago. Previously, I randomly swapped meals, but now I adhere strictly to the plan. Even a simple change can make a drastic difference in the appearance of my figure.” [9] 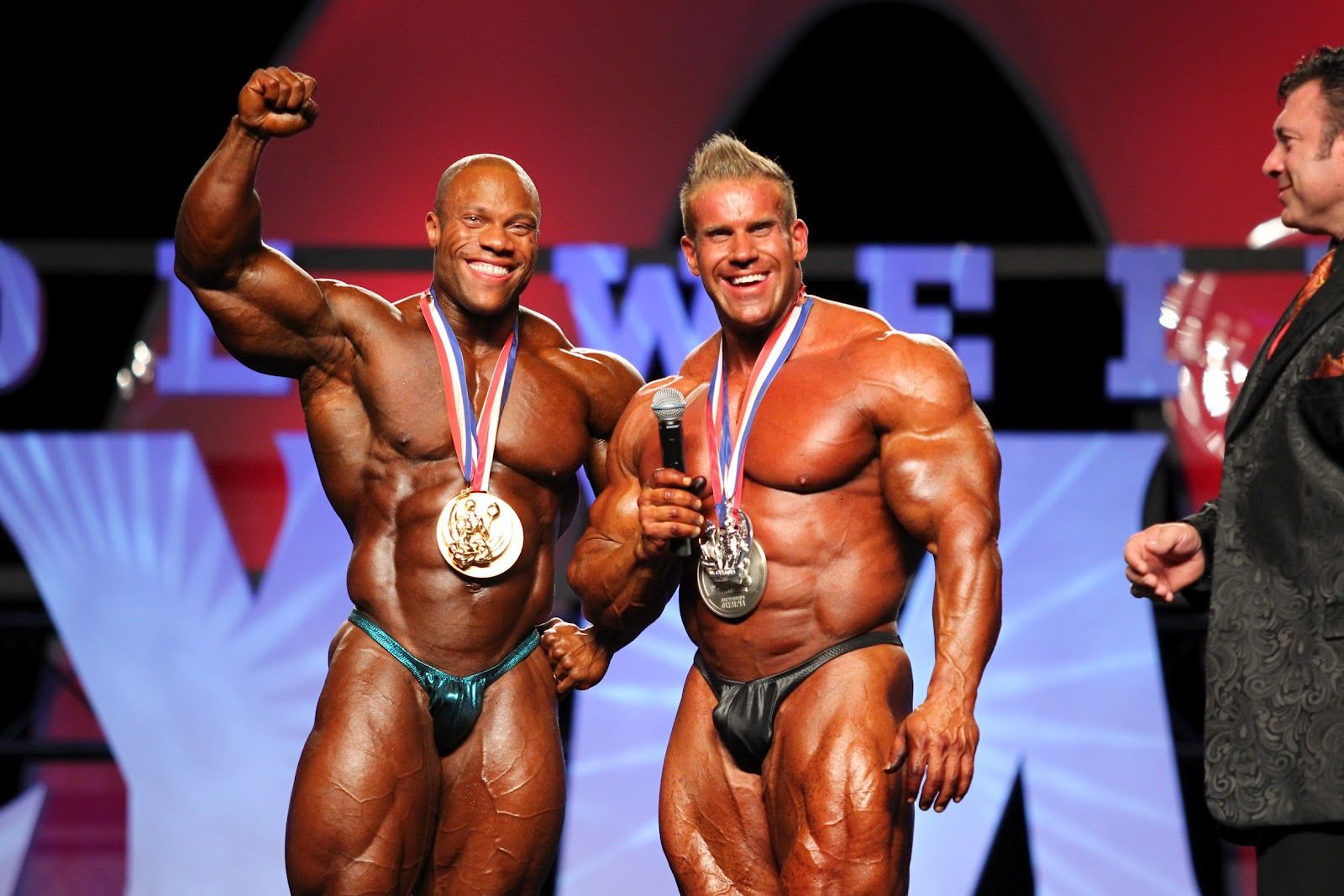 “Righ now, I weigh 127 kilograms and I am more shredded compared to 2008 when I weighed 125 kg. Consumption of starch carbohydrates like potatoes instead of rice helped me grow and I don’t feel bloated.” [9]

One of the greats

Do you know an old saying that claims that you have to beat a champion to be a champion? In the last seven years, Mr. Olympia contestants trained all year round to get the ruling champion, Phil Heath, off the throne.

Names like Jay Cutler, Kai Greene, Dexter Jackson, and Shawn Rhoden stood beside Phil during the last comparison round just to see Phil defend his title of the world’s best bodybuilder. In 2017, a new face appeared on the stage next to Phil – Mamdouh “Big Ramy” Elssbiay, but the result remained the same as The Rock grabbed the microphone and again announced the winner’s name – “Phil Heath”. 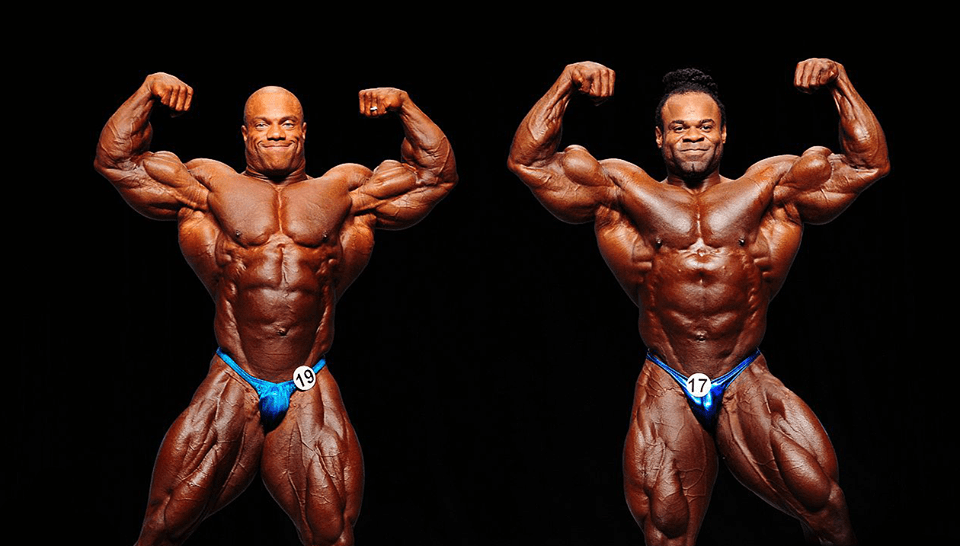 Phil continues to get closer to his goal – the tenth Mr. Olympia title – which he declared to be his goal two years ago. Looking at his determination, passion, motivation, effort, self-esteem and past wins, it is difficult to refute this goal. Mr. Olympia 2017 was concentrated around the world’s three best bodybuilders: Heath, Ramy and newcomer William Bonac. Shawn Rhoden, who came second behind Phil in 2016, clearly lagged behind the competition from the perspective of muscle definition. In the last year’s contest, he dropped from second to fifth place. Dexter “The Blade” Jackson also felt the power of a more difficult, better-prepared competition that dropped him down to fourth place.


It was another great year of the contest that culminated in a result commemorating the performance of the legend – Arnold Schwarzenegger. Phil lacks only one title to join Ronnie Coleman or Lee Haney as eight consecutive titles winners and two titles to fulfill his dream. [10]

“No matter what happens to me as of today, I have achieved the same number of titles as Arnold Schwarzenegger. No one else can afford to say that except for Coleman and Haney. That is all. I’m very proud of that.”

The next year will certainly be interesting as Phil had surgeries of two large abdominal hernias shortly after the last contest. Therefore, his preparation will certainly be significantly different from the last one in order to reach 100% of his potential on Mr. Olypmia 2018 Stage. 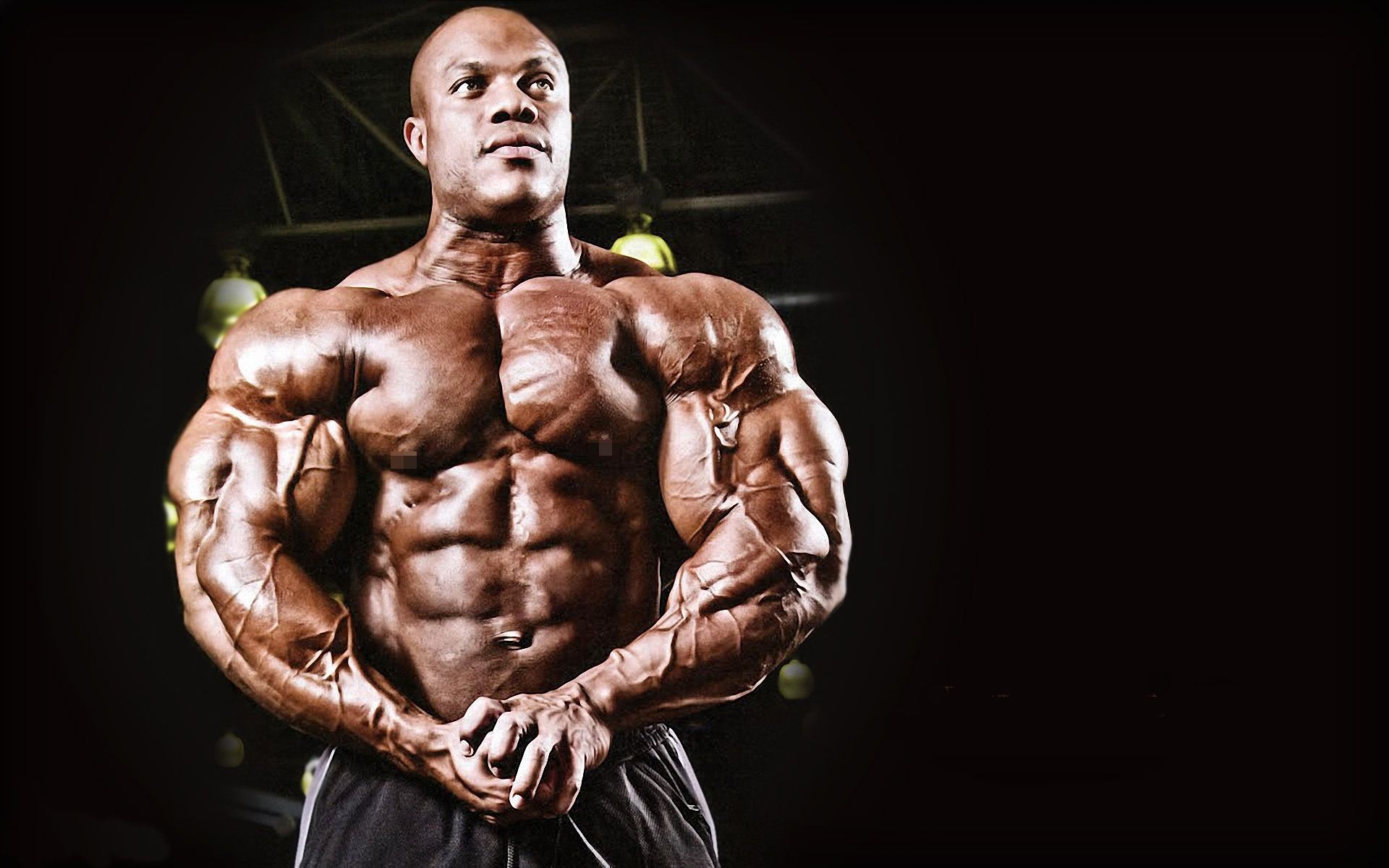 The IFBB pro and 7-time Mr.Olympia title holder is determined to continue fighting and win even more Mr. Olympia titles. He hopes to break the current record of 8 Mr. Olympia titles and win an equal 10. Phil’s intention is “to represent bodybuilding so that people can identify with it while maintaining respect for the sport“. He is currently involved in the “Make it Fit Foundation” through which he intends to raise awareness of autism. He is also the president of his own brand producing supplements – Gifted Nutrition – which he founded in the summer of 2014.[11]

Finally, we recommend a very interesting interview with Phil in which you will hear his opinion on Mr. Olympia, social media fitness celebrities, IFBB, or other interesting stuff:

What is your opinion on this bodybuilder? Will he manage to defend the Mr. Olympia title this year? Share your thoughts in the comments. If you liked the article, please support it by liking or sharing.