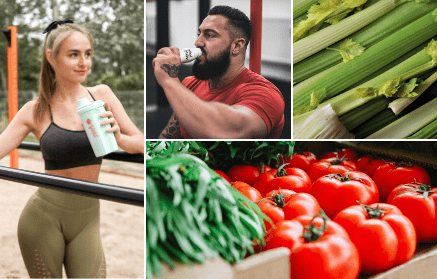 Have you heard about negative calories and a diet based around them? In this article, we will explain to you whether there are foods that require more energy to process than the food itself. Learn if eating only celery, tomatoes, and other vegetables is a good way to lose weight.

Negative calories – what is it?

Have you come across the term “negative calories”? It is possible that it has been associated with “negative-calorie foods” or a “negative-calorie diet” (NCD). It is a dietary concept in which foods with a negative caloric effect are consumed. This means that the body needs more energy to process them than is found in these foods. This hypothesis assumes that the intake of these foods will result in a caloric deficit, which sounds interesting to people who are trying to reduce body weight. [1] [2]

The human body needs the energy it receives from food for all activities, but it also needs some energy to consume and process it. You may not have known, but some of the calories in food are used by the body to process food, and some burn in the form of heat. One of the terms that refers to this process is the thermic effect of food (TEF). However, you may also encounter names loosely translated as “diet-induced thermogenesis” (DIT) or “specific dynamic action” (SDA). [3]

The thermic effect of food varies according to its components because the body needs a different amount of energy to process proteins, carbohydrates, and fats. The highest thermic effect of food has a protein-based diet (20-30%). This means that when you consume 100 calories of protein, approximately 20-30 calories are used to process them, so you only eat 70. With a traditional diet, the thermal effect represents about 10% of caloric intake. However, it depends on the composition of the diet, because lunch with a predominance of proteins than fats has a different thermal effect. You can compare it in the table [3]:

In addition to the highest thermic effect, proteins also have several other benefits associated with weight loss. Read the article for more info – Protein and weight loss: how do proteins affect weight loss?

However, in addition to the thermic effect of food, it must be remembered that only part of the total number of calories is used by the body as energy or for storage. When absorbed, the calories excreted, such as fiber or partially indigestible food, should also be considered. We can express this, for example, by an equation [1]:

Are there negative calorie foods?

The idea of a diet in which you only eat foods with negative calories and lose weight is tempting. On the internet, you will find examples that are included in this type, often vegetables or fruits. One of them is, for example, celery because it is made up mainly of water and fiber. But is it really possible to achieve “negative calories”? [4]

We will probably disappoint you because the idea of negative calorie foods is a myth, a theoretical premise, and perhaps a pious wish. This is confirmed by the skeptical attitude of several doctors and nutritionists. The main argument that confirms that explicitly “zero” calories do not exist is a scientific study performed on a lizard (Pogona vitticeps). For all articles, we use the results of research conducted only on people, but in this case, we will make an exception. For exact results, a machine was used that measured the metabolic rate and energy required to digest celery. 33% of calories were used for digestion and 43% were excreted, which unfortunately does not represent 100%. The difference is 24% of calories from raw and diced celery. It follows that even though celery is mainly made of water and fiber, it does not “pass” through the digestive tract without some energy remaining in the body. [5]

There is no scientific evidence for the existence of “zero-calorie” foods, but there are examples of such low-calorie content that it could be called almost zero. Examples of zero-calorie foods from vegetables and fruits are those with high water content. We, therefore, offer you a few examples [6] [7]:

Some of the energy goes to digestion, then calories are eliminated, but you may have thought that energy is also needed to process food in the mouth. Now you may be saying that just chewing is the key to negative calories. Don’t expect any holy grail to lose weight. According to research focused on energy consumption when chewing gum, you burn about 11 calories in 1 hour. If we took away the energy needed to digest and absorb celery and take into account only the chewing gum, you would need to “stir in your mouth” that 100 g with 14 calories for about 76 minutes. [7]

Zero-calorie foods do not seem to exist, but we have some tips for low-calorie foods that are exceptional for their content. This chapter is a “compensation” for refuting the myth. We have divided them into categories in which everyone can find their favorites. [6] [7] [8] [9]

Want to know more about the benefits of green tea and coffee? Read the articles – 8 positive effects of green tea for the health of athletes and Caffeine and how to make your training more effective.

There seems to be no negative calorie diet, which is perhaps a positive message under certain circumstances, as it could lead to too rapid weight loss. Even if that was true, this vision of weight loss could be about 1 kg per day, which is the exact opposite of healthy weight loss. [2]

The concept of a diet based on negative calories is built upon the consumption of low-calorie food. With this diet, you do not have to worry about burning calories, because according to this theory, you lose weight without any further activity. However, according to the expert, this is not the right way, because a varied diet is needed to get all the necessary nutrients. In addition, no one would enjoy eating celery, tomatoes, and carrots. Replacing a diet exclusively with a low-calorie meal is unhealthy and, moreover, uninteresting. And we haven’t mentioned the yo-yo effect yet. Instead, it is certainly healthier and more interesting to replace high-calorie meals with the low-calorie ones and mix them with nutritious meals for nutrient intake. [11]

Scientists have not yet confirmed that there are foods with negative calories. Even if it succeeds, a monotonous menu is not the best way to go. However, there are low-calorie foods that can be a healthier alternative. Anyway, we believe you have learned everything you need to know about this topic. Do you want your friends to know about negative calories? Feel free to support the article by sharing.