0%
0% (0)
Manufacturer: Gymbeam
Nutritional Yeast contains deactivated yeast, which will provide great flavour to your healthy goodies. It differs from the traditional yeast used in baking mainly in appearance, taste, and usage. Nutritional yeast takes the form of fine, sweet and salty flakes with a taste reminiscent of cheese. These are most often used as an addition to pasta, spreads, sauces, salads or used in the production of vegan cheese.
Out of stock
We expect: Dec 12, 2022
Estimated price €2.95 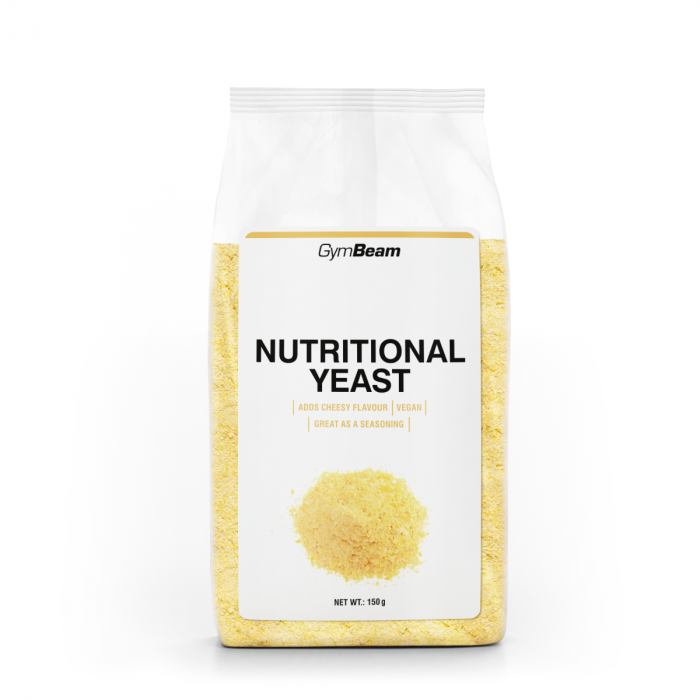 Nutritional Yeast – deactivated yeast in the form of fine flakes, which will provide your vegan and other dishes with a taste reminiscent of cheese

Nutritional Yeast is a popular vegan seasoning that contains deactivated yeast. The main difference between the nutritional yeast and the classic yeast, which is used mainly for fermentation, is in appearance, taste, and usage. It is made from a yeast strain called Saccharomyces cerevisiae that is packed full of beneficial nutrients. First, the yeast is allowed to multiply on a substrate rich in sugars, such as molasses. Then it is dried and heated at a temperature of about 40 °C. This results in its deactivation while retaining the great taste and nutritional value.

The final result are fine flakes, which do not need to be heat treated and can be added directly into your dishes, similar to seasonings. Nutritional Yeast has a sweet and salty taste that is slightly reminiscent of nuts or cheese. This type of yeast is therefore often referred to as vegan Parmesan.

What are the uses of Nutritional Yeast? It is a perfect way to flavour vegetarian, vegan, and meat dishes. It goes well with pasta, risotto, soups, and meatballs and will also enrich dishes with couscous, quinoa, bulgur, or herb pesto. Spreads, dips, or salad dressings will also benefit from the added flavour. You can also add it to scalloped dishes or use it as an alternative to breadcrumbs for frying. Last but not least, you can use it in preparation of vegan cheeses and sauces.

The biggest advantage of this seasoning is its ingredient profile. Almost 50 % of it is made up of plant-based proteins, which will help with the intake of this nutrient. We also can't forget about the high fibre content, which s important for a healthy digestion. In addition, nutritional yeast is also sought after by people for the content of other beneficial nutrients.

Therefore, it is sure to find its place in the kitchen of every supporter of a healthy lifestyle. It is ideal for vegetarians, vegans, but also for people who are looking for a way to flavour their dishes in an unusual way. Moreover, it does not contain gluten, which will be appreciated by people who suffer from celiac disease as well as other individuals who are trying to limit its intake.

Store in a cool, dry place. Protect from direct sunlight.