Turbo Oxxiwin is a decaffeinated stimulant that you can use in the evening without negatively affecting your sleep. In addition to selected vitamins and iron, which helps reduce fatigue and exhaustion, the product contains also Ginkgo biloba extract to support the nervous system, blood circulation and reduce fatigue. 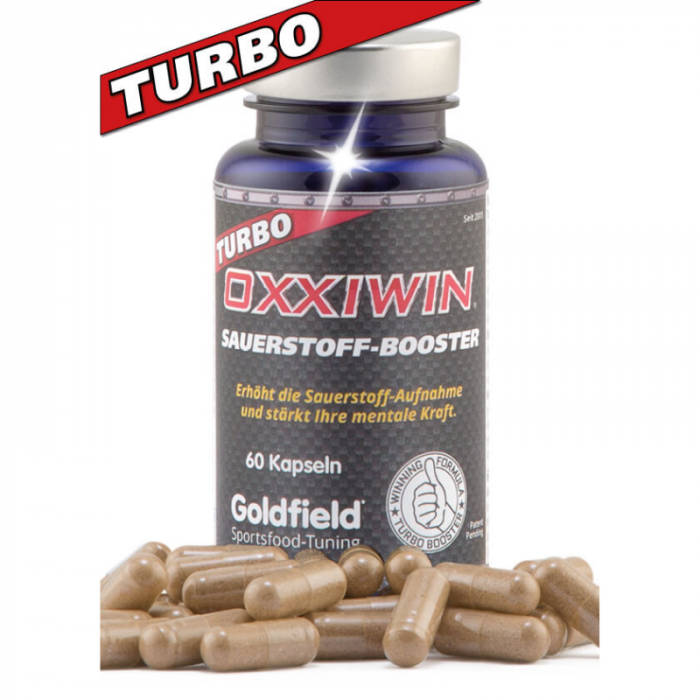 Turbo Oxxiwin is an effective decaffeinated pre-workout for all power and endurance athletes who want to get the most out of their training. The product contains, for example, an extract of Ginkgo biloba. It is used to support the nervous system, memory, and blood circulation. Better blood circulation can help increase muscle oxygenation and thus improve performance. The other ingredient is N-acetyl-L-tyrosine. It is an effective form of tyrosine which is the starting material for the production of a number of neurotransmitters, including adrenaline or dopamine.

Moreover, the product also contains selected vitamins that support the overall functionality of Turbo Oxxiwin. For example, vitamins B6 and B12 contribute to the proper functioning of the immune system, nervous system, psyche, and energy metabolism. Vitamin C, in turn, affects the functioning of immunity, protection of cells from oxidative stress and proper collagen production, which is important for optimal cartilage function. In addition to the above, the capsules also contain vitamin B5 (pantothenic acid), which contributes to the proper metabolism important for energy production, proper synthesis and metabolism of steroid hormones, vitamin D and some neurotransmitters. Last but not least, it also has the effect of reducing fatigue and exhaustion. The contained vitamin B3 then contributes to the proper function of energy metabolism and muscles. Vitamin B1 then contributes to the optimal function of the psyche and heart activity. The only mineral contained, iron, also helps to support immune functions and reduce fatigue.

Another part of Turbo Oxxiwin is a complex of micronutrients. It includes, for example, alginic acid. It is one of the polysaccharides found naturally in brown algae and is a common part of supplements to support performance or weight loss. However, there is also cinnamon extract which is a common part of fat burners as well as turmeric known for its curcumin content. The other extract contained comes, for example, from basil, mustard, saffron, mugworts, and coriander.

In order to get the most out of the whole supplement, it also contains piperine. It is an extract of black pepper, which is added to increase the absorption of individual ingredients. Turbo Oxxiwin comes in a practical capsule form which makes it convenient to use. This caffeine-free pre-workout will be loved especially by people who strive to maximize performance and reduce fatigue.

Take 1 capsule 15 minutes before training or other physical exercise. Drink down with plenty of water. The maximum daily serving is 3 capsules.

Do not exceed the recommended daily use. Keep out of reach of children. Store in a dry and cool place. Protect from direct sunlight.