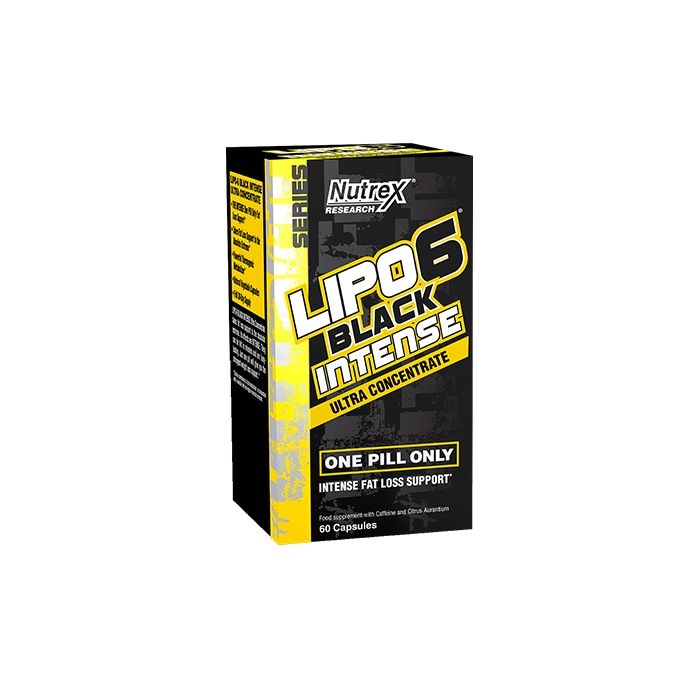 Lipo 6 Black Intense Ultra Concentrate is a complex thermogenic fat burner that contains 8 active ingredients for more efficient fat burning. Its formula is based on functional substances led by caffeine, which, in addition to its known stimulating effects, also affects hormones (catecholamines). These hormones support the burning of fat during which energy is released, which can then be used for movement and sports. Moreover, the product helps support alertness and concentration. Theobromine, which comes from cocoa, also has similar stimulating effects. In addition, this ingredient is associated with the ability to regulate appetite which you will certainly appreciate for weight loss.

The ingredients list also contains an extract from the bitter orange tree (Citrus aurantium), which is known for containing the popular fat burner synephrine. Its effects also include the ability to increase the breakdown of fats into energy. It is accompanied by an extract from Coleus forskohlii which, thanks to the bioactive component forskolin, can also boast positive effect on weight loss. The extract from Grains of Paradise (Aframomum melegueta) also has similar effects. This plant comes from the same family as ginger and it shares a beneficial effect on fat breakdown and weight loss.

N-Acetyl-L-Tyrosine, from which thyroid hormones (thyroxine and triiodothyronine) are formed in the body, also plays an important role in the product. Their optimal amount is then key to the correct function and speed of metabolism which plays a significant role in reducing body weight.

This complex fat burner also contains an extract from ginseng (Panax Ginseng) which ranks among the adaptogens. These are combined with a positive effect on mental and physical performance thanks to which they can make it easier for you to cope with the difficult period that weight loss undoubtedly is. Choline Bitartrate, in turn, is a representative of nootropics that are associated with the support of concentration, motivation and focus on physical performance. Thanks to this, you can handle even more demanding training sessions which then leads to a greater amount of calories burned. For the effective utilization of all substances contained in the body, the product is also enriched with black pepper extract (BioPerine®).

Lipo 6 Black Intense Ultra Concentrate is thus an ideal supplement for all people who are trying to lose weight or are preparing for competitions and need to get into shape. It works best in combination with exercise and diet. In addition, it will boost you up and provide energy to fulfil all your goals. Another benefit is also the high concentration of active ingredients thanks to which it is enough to take only one capsule 1-2 times a day.

The food is intended for special nutrition. Store out of reach of children. Store in a dry place at a temperature of 15-25 °C. Protect from frost and direct sunlight. Use by the date indicated on the package. Not recommended for children or pregnant and breastfeeding women. Women who are pregnant or may become pregnant should consult a doctor or pharmacist prior to use of this product. Not intended for people sensitive to caffeine. Monitor other sources of caffeine, such as medications, food, or beverages, while using this product. Do not exceed the recommended dose. Do not use in combination with alcohol. Nutritional supplements should not replace a varied diet.