Ginkgo Biloba VEGE is a concentrated extract from Ginkgo biloba, which is very popular for many reasons. Some people use it to support blood circulation, reduce the feeling of swollen legs, or as a helper to improve memory. Ginkgo biloba is high in effective antioxidants that help fight oxidative stress.

Out of stock
Estimated price €8.50 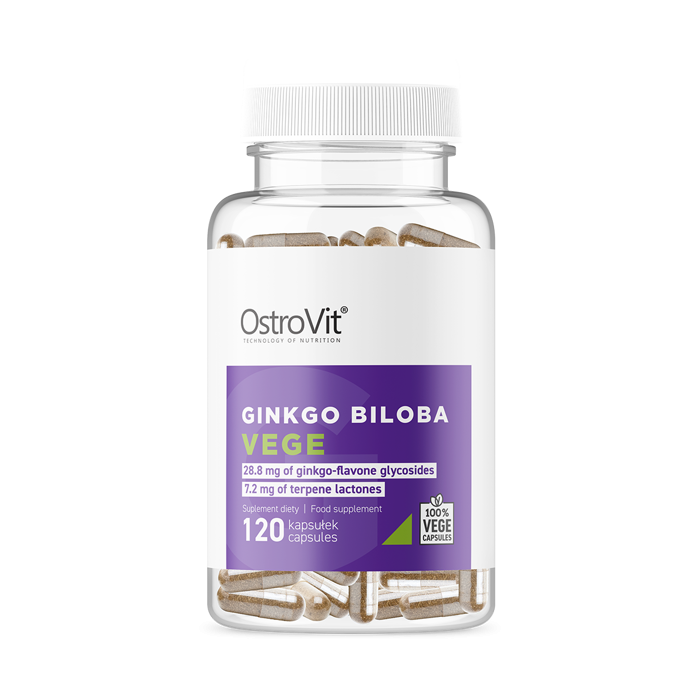 Ginkgo Biloba VEGE contains a high-quality extract from Ginkgo biloba leaves (Ginkgo Biloba L.) standardized to 24 % of biologically active substances in the form of ginkgo-flavone glycosides and 6 % terpene lactones. As a result, it can have many positive effects on the functioning of the human body. Ginkgo biloba itself is associated, for example, with its effect on blood circulation. That's why it's popular with people who, especially in the cold months, suffer from cold limbs and want to improve their blood circulation. What's more, people who have swollen feet after sitting or standing all day can also benefit from it. However, these are not the only reasons why it's worth taking ginkgo extract.

This plant is also popular among those who want to improve cognitive function and brain performance. This ability of Ginkgo biloba is popular especially among older people or students and top managers who need maximum concentration or memory in order to give the best performance.

If you want to support the health of your circulatory system, and improve blood circulation, memory, and other cognitive functions, Ginkgo Biloba can be a great helper.

The product may contain milk (including lactose), soybeans, peanuts, other nuts, sesame seeds, oats, eggs, and crustaceans. Do not exceed the recommended daily dose. Do not use the product as a substitute for a varied diet. A balanced diet and a healthy lifestyle are recommended. Do not use if you are allergic to any of the ingredients in the product. The product must not be used by children, pregnant or breastfeeding women. Keep the container tightly closed in a dry place out of direct sunlight at a temperature of 15-25 °C. Keep out of reach of children.